“I have a great relationship with the Blacks”, a Trump Tale 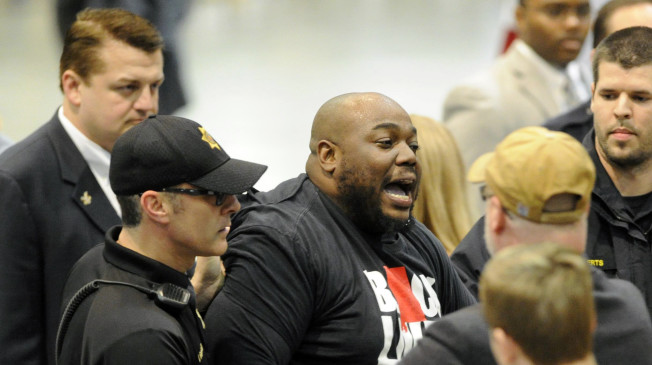 A protester is removed by security as Republican presidential candidate Donald Trump speaks during a campaign stop Saturday, Nov. 21, 2015 in Birmingham, Ala. (AP Photo/Eric Schultz)

Tensions were high at the Donald Trump rally in Birmingham, Alabama on Nov. 22nd.  Mercurio Southall, a Black Lives Matter protester, entered the arena in a Black Lives Matter t-shirt and began shouting the phrases, “Black Lives Matter” and “Dump the Trump.” The supporters at the rally immediately jumped to Mr. Trump’s defense and shut down the rhetoric by tackling the man to the floor.

Meanwhile, Mr. Trump continued with his speech, blissfully unaware of the disturbance. When the scene escalated into something that could not be ignored, he finally confronted it, saying, “Get ‘em the hell out of here.” Then, he once again continued with his speech. Southall was punched in the face, punched in the neck, kicked in the chest, kicked in the stomach and choked once he was pushed to the ground. He was repeatedly called a n****r and a monkey by members in the crowd. The only time anyone jumped to his defense was when the choking began and a woman in the crowd shouted, “Don’t choke him, don’t choke him.”

After Trump asked for Southall to be removed, security escorted him out of the building. He was not offered medical attention and he was not asked if he wanted to press charges. Three people were asked to leave the rally after the incident, but there have still been no arrests made. Southall is an activist for the Black Lives Matter movement. His family is originally from Selma, Alabama and his grandparents marched across the bridge with Martin Luther King. He says that he was raised to do this. He has been arrested for standing up for the Black Lives Matter Movement in Alabama in the case of Kindra Chapman and for participating in a protest for the movement in downtown Birmingham.

The police lieutenant in Birmingham has drawn attention to Southall, calling him an agitator and saying that the reasoning behind these protests is for attention. Supporters of Trump agree, saying he was intentionally trying to antagonize the crowd. Trump has also come out with a statement, saying, “Maybe he should have been roughed up because it was absolutely disgusting what he was doing.” However, the lieutenant says that Southall is welcome to file a police report or press charges at any time.

Trump’s far out rhetoric has caught attention this presidential race. Chase Canatore agrees, saying, “This isn’t politics anymore, it’s becoming a show.” The fear mongering, crowd pleasing speech coming from the Trump campaign has sparked violent and aggressive behavior from his supporters; as seen at this last event. Andrew Kovac, a student at Ohio State University adds, “I think it just comes down to what Trump says in public and the tone in which he uses towards the racial concerning blacks, Mexicans, and other groups.” Trump’s comments have been welcomed by voters because it is the truth that nobody is talking about. He does not use a filter, and his supporters appreciate that because he is not using the political tactics that they resent. Unfortunately, Trump’s refusal to monitor his speech has permitted his supporters to unleash their wrath, resulting in the violence and anger that was seen in Birmingham.

At the Trump Hotel in New York City, more than one hundred leaders of the black Christian community gathered to discuss issues within the African American community. The meeting was originally scheduled to be a press conference, but when confusion arose over support for the candidate, those plans soon changed.  Donald Trump originally stated that he had the support of over one hundred black evangelical pastors. He did not release any names of specific endorsers, and soon after received a perplexed response from the so-called supporters, who said that they never had any plans to endorse the Republican frontrunner.  Immediately, a debate arose. Darrel Scott, an Ohio pastor who had organized this meeting with Trump jumped to the candidate’s defense, saying it was a miscommunication. Trump instead that the Black Lives Matter folks had called the pastors up to sabotage his effort because he believes “all lives matter.” In an effort to convince the pastors that there was no “setup” for an endorsement, the campaign decided that a scheduled private meeting would be best.

After two hours of talks behind closed doors, Trump was not about to miss his moment in the spotlight. He walked up jubilantly to the reporters, announcing that it was an amazing meeting and he felt a lot of love in the room. When asked about how he would handle issues for African Americans would be addressed as President, his response was that the issues would be addressed in the coming months, and in the coming years. He refused to give a specific answer on the Black Lives matter movement.  The response from attendees was disparate. Some felt that the meeting was productive and they were able to get through to Trump about the issues facing today. The pastors made a point to mention that anyone who knew Trump personally knows that his rhetoric does not define him. They pointed out the media’s role in villainizing the candidate and urged voters not to let journalists make up their minds.

There was also significant backlash from this meeting. Christian activists and prominent African American pastors urged their peers to cut ties with Mr. Trump. One pastor from Baltimore called the meeting an act of prostitution and referred to the act as people wanting to seek their “15 minutes of fame.” Other attendees felt that it was a clear set-up to boost the candidate’s poll numbers.

Trump remains confident after the meeting and says he looks forward to many, many endorsements to come.