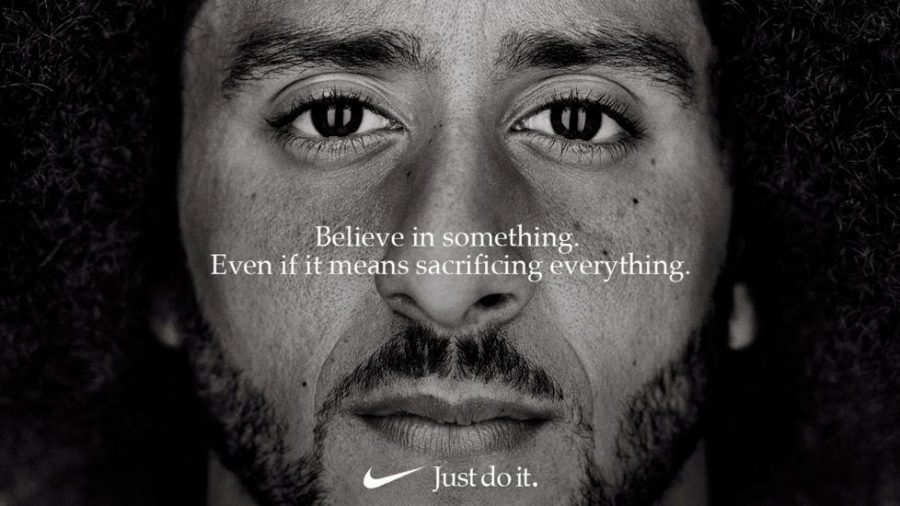 Colin Kaepernick was the first major public figure to take a knee during the national anthem before a preseason game in August of 2016. He explained his controversial action as a protest against police brutality toward African-Americans. “I am not going to stand up to show pride in a flag for a country that oppresses black people and people of color,” Kaepernick said. “To me, this is bigger than football and it would be selfish on my part to look the other way. There are bodies in the street and people getting paid leave and getting away with murder.” Although Kaepernick was met with criticism, he was predominantly praised. Some of his teammates, along with other NFL teams, joined him in protesting racial inequality in the country. His jersey was worn across the country in support of his views, and he now stands as the face of Nike.

The two-minute long advertisement was not only narrated by Colin Kaepernick, but featured a number of well-known athletes. Ranging from refugees who are now major league soccer players, olympians, Lebron James, Serena Williams, and handicapped athletes. The advertisement then ends with Nike’s famous logo, reading, “It’s only crazy until you do it. Just Do It.”

According to CNBC, Nike accumulated roughly 170,000 Instagram followers around the release of its new ad campaign. It became all the rage across social media, with many celebrities and big-name athletes taking to Twitter and Facebook to show their support. However, days following the release of the advertisement, many unhappy Nike customers took to social media platforms to share videos of them burning Nike sneakers. President Trump also commented on the situation, tweeting,“Just like the NFL, whose ratings have gone WAY DOWN, Nike is getting absolutely killed with anger and boycotts. I wonder if they had any idea that it would be this way?”

The controversial advertisement made its way into government offices as well. When Mayor of small city Kenner, Louisiana ordered a ban of Nike products in the town, he quickly rescinded the ban due to the advice of the city attorney and backlash from residents. University student, Madison Kerth, stated, “Across my personal feed of Kenner residents, the majority feelings are of embarrassment to be associated with a mayor that would propose such a ban.” A Kenner resident on Facebook stated “He has the right to not support Nike himself. He does not have the right to force his belief on others.”

Nike has been known to push social boundaries and cultural norms, and the advertisement is a clear example. Social and politically active figures have garnered the support of the billion dollar company, who emphasizes the value of standing up for your beliefs.