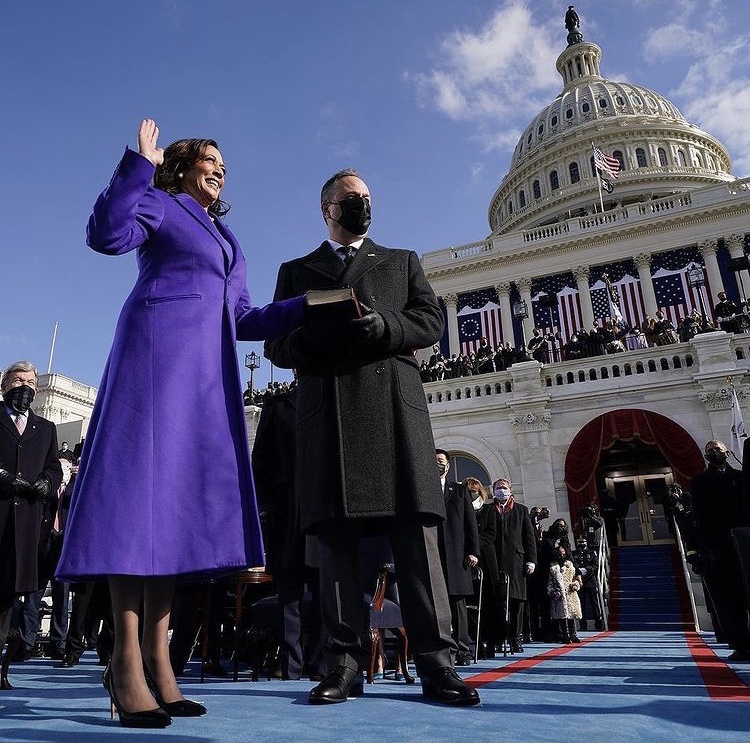 While the Biden administration’s urgent priorities lie with issues like combating a recession, inequity, systemic racism and an ongoing pandemic, the politicians’ sartorial choices offered a glimmer of something more positive and uplifting.

Fashion diplomacy royally returned on Inauguration Day; utilizing brands that represent the White House’s objectives and intentions was a tradition followed by Michelle Obama and first ladies of past decades.

Every aspect of Vice President Kamala Harris’ outfit was designed by Black designers.

At the beginning of the pandemic, Rogers used the resources in his store to provide PPE to frontline medical workers.

Purple is a bipartisan color due to the combination of Democratic blue and Republican red. Several politicians and their spouses were seen sporting the color.

Not only is purple symbolic of unity, but the color is also worn to show support for women’s suffrage. In the 1900s, women wore the color while fighting for their right to vote.

Hudson launched his brand in 2014, establishing an aesthetic that is defined by immaculate tailoring and infusions of androgyny paired with sensual silhouettes.

Lady Gaga performed the national anthem wearing a custom-made black and red Schiaparelli dress embellished with a large golden dove-shaped brooch that could not be missed.

“A dove carrying an olive branch. May we all make peace with each other,” the star said on her Twitter.

Jennifer Lopez, who performed “This Land is Your Land” and “America the Beautiful” was wearing a blizzard of white Chanel.

For a woman in office, wearing white is a symbolic tradition.

The color is traditionally associated with suffragettes and also often worn by women lawmakers over the course of the Trump administration.

National Youth Poet Laureate Amanda Gorman who performed at the Inauguration wore a custom yellow coat complemented by a red satin headband, both designed by Prada. Gorman accessorized with jewelry gifted to her by Oprah Winfrey.

Ella Emhoff, stepdaughter to the Vice President, was wearing a dainty white collar on top of her bejeweled plaid Miu Miu coat. She wore the sparkle adorned piece with a prairie-style dress by cult label Batsheva, a piece that nodded to her Jewish heritage.

While these looks certainly garnered attention and praise, according to TikTok, an entirely different and less expected group stole the sartorial show: the President’s Kin.

President Biden’s grandchildren went viral on TikTok for their monochromatic inauguration looks. Naomi Biden in all white, Finnegan in a sequined camel, Maisy in a navy and black Rodarte dress with Nike X Dior high top sneakers and Natalie in a custom pink look from Lafayette 148 New York.

For the church service at St. Matthews on the morning of the Inauguration, as well as for the ceremony itself, President Joe Biden wore a custom-made blue suit by American designer Ralph Lauren.

The designer made the President’s suit, tie and overcoat in the same fabric as his mask.

Jill Biden’s outfit was designed by Alexandra O’Neill who founded her label Markarian in 2017. Markarian is a sustainability-minded brand, with all clothing made-to-order to reduce waste. Her ensemble was complemented by her monochromatic gloves, mask and shoes.

This year, the clothing worn at Capitol no longer strictly adhered to the traditional dress code of Inaugurations past. The clothing instead excitingly reflected a more diverse and more authentic way of U.S. fashion.