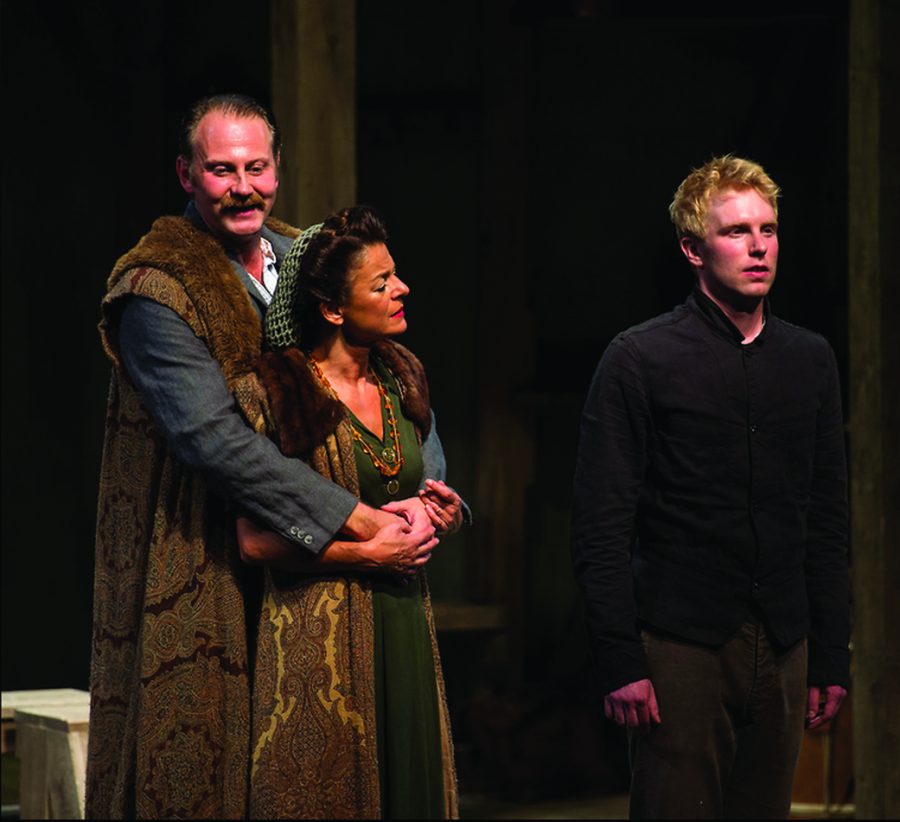 The university’s Michael Schimmel Center for the Arts kicked off opening night of the second season of Pace Presents with a bang. “Hamlet” a Shakespeare classic and one of the most oft-quoted plays in the history of English literature was performed by actors and actresses who made their way to NYC directly from Shakespeare’s Globe Theatre in London.

Benz portrayed a very young at heart image of Hamlet and captured the attention of many with his blonde hair. “I really marveled at Hamlet’s stage presence” Ella Brooks, freshman, said. “It kept me interested and really set the stage for the events that followed.”

Following the story line to perfection, the directors managed to get the audience’s attention from the start. The play opened with Hamlet’s father’s ghost walking past the front row. This alluring stroll of a very dark and mysterious figure drew everyone’s attention to the forefront as they waited to hear the words the being would utter.

When Hamlet and The Ghost cross paths, The Ghost commands Hamlet to avenge his “foul and most unnatural murder.” From that moment on the stage is set and the play is filled with the dynamic scene changes, hilarious humor, tragedy, sexual jealousy, and cruel murder that define Hamlet’s timeless plot.

Despite most of the actors playing different parts in the play and having many different outfits, they pulled the changes with ease. Their most impressive feat was their ability to change into and out of costumes in record pace.
Hamlet is a character who thrives on changed emotion. His personality is in complete disarray throughout the play due to love.

He is driven by motives to kill his uncle Claudius who incestuously married his mother and at other times he is driven by his own love to prove to Ophelia that he is not mad but seeking revenge.
Despite these motives, Michael Benz does great job acting vibrant on the surface. Below the surface, Hamlet is driven to kill. On the outside and to the rest of the community, Hamlet fakes happiness and insanity so that no one knows his true plans.

Benz, through comedy and crafty pronunciation of his lines is able to interpret Hamlet’s inner and outer turmoil in a truly phenomenal way that defines his character’s quest for self knowledge.
Shakespeare always intended for Hamlet to be a dark character. He is mischievous and cunning and capable of thinking on his feet. He is a character who goes through an agonizing turn of events. This is one aspect not always demonstrated during the play. Many of Hamlet’s soliloquies were merely recited persuasively, but were not dwelled upon with deep emotion.

Despite the classic confrontation between Hamlet and Ophelia which drives her into her own suicidal insanity, the two very rarely shared the stage.

Hamlet’s upbeat personality was both a benefit and a flaw. It portrayed how he needed to put on an act in order to deceive the community of his deeper thoughts but it also misguided many members in the audience about how Hamlet as a son experienced the murder of his own father.

When Hamlet has the chance to kill Claudius while he was praying, you can see the struggle overwhelm him. That part of the play was excellently showcased. Had the rest of the play contained a little less humor and more of that dark passion, it would have truly rocked the house.

When Hamlet engages in the sword fight, all eyes become fixated toward center stage to see just exactly how each character will die. His mother indeed drinks the cup of poison, Hamlet is slain by a scratch, and Claudius is forced to drink the poisonous cup while also being stabbed to death by Hamlet. In Shakespeare, all unnatural characters must die.

This is the reason why Horatio lives on to tell Hamlet’s story. He did not veer to any extremes during the plot. Claudius represented evil and murder and Hamlet followed suit by developing insanity in order to avenge his father. At the end, Horatio is on stage amidst an amalgamation of slain corpses and explains to Fortinbrass all that has occurred. Hamlet was in fact a noble but tragic hero.